Overseas buyer activity continues to support price growth within our market. Indeed, over the past three months, 71% of properties sold by Crayson in Notting Hill, Holland Park and Kensington have been bought by non-British buyers.

While strong price growth was recorded in 2012 (13.9% in Notting Hill), the volume of transactions continued to be more muted than in previous years. This was particularly evident in the final quarter when there was much uncertainty over a proposed ‘Mansion Tax’ and changes to the cost of holding property offshore.

With ‘Mansion Tax’ scrapped and clarity given on plans for taxing ‘offshore’ property holdings in the Draft Finance Bill on 11th December we expect that a number of buyers, both domestic and overseas, will now feel more comfortable in committing to purchase as we move further into the new year.

‘Since the budget overseas buyers have dominated our market, with two-thirds of properties sold by Crayson since March bought by non-British buyers, compared with just one third a year earlier.’
Nicholas Crayson

Looking back over 2012, it was another stellar performance for prices in prime London, with prices per square foot exceeding £1,170 within our market. This was an increase of 7.5% year on year.

Whilst nationally values rose by just shy of 1% over the course of the year, London continued to outperform. Of the top ten local authorities nationally, eight out of ten were London boroughs, led by Westminster and Kensington & Chelsea.

The investment market within our area remains particularly buoyant. Notting Hill flats priced at between £1 million and £2 million are highly sought after, with the number of sales increasing by 12% year on year. Investors look set to remain prevalent and the latest figures from the CML support this with a 19% rise in buy to let lending in the first nine months of 2012 compared with the same period in 2011. 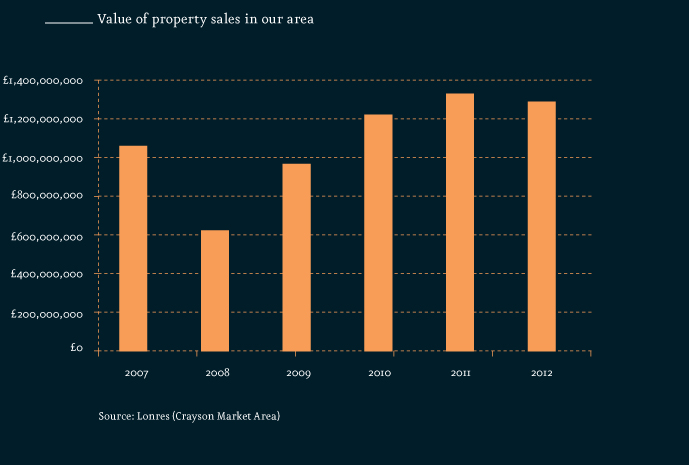 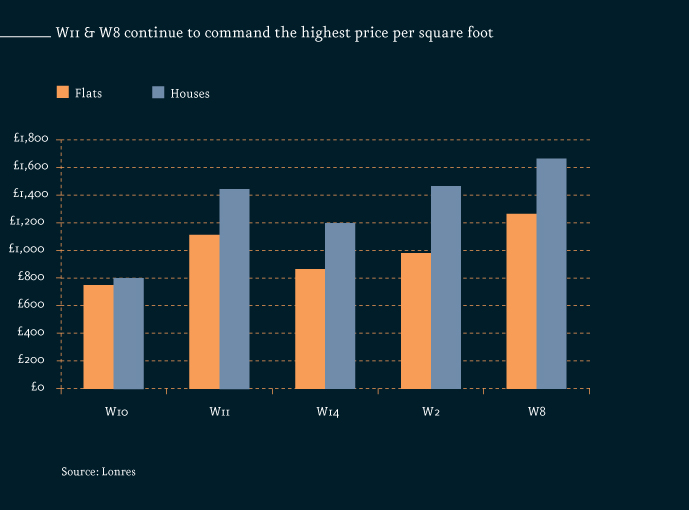 Over the course of 2012 we saw transaction levels across our market drop by 7.8% compared with 2011. The increase in stamp duty for homes over £2 million to 7% and the uncertainty over the possible implementation of a ‘Mansion Tax’ and changes to homes held ‘offshore’ 100 impacted on sales activity between £2 million and £5 million. Year on year the number of properties sold within this price bracket fell by 23%.

In contrast, sales in the upper end of the market (homes selling for in excess of £5 million) increased over the same period, bolstered by strong overseas buyer demand. Within Notting Hill, Holland Park and Kensington there were an average of just over four properties sold per month for £5 million or higher in 2012, up 43% on the previous year.

However, looking at transactions on a monthly basis, the last four months of the year actually saw sales activity exceeding that experienced in the same period in 2011. The number of properties sold between September and December 2012 was 12% higher than in 2011, compared with the first eight months of the year when sales were down 17% on the same eight months in 2011. 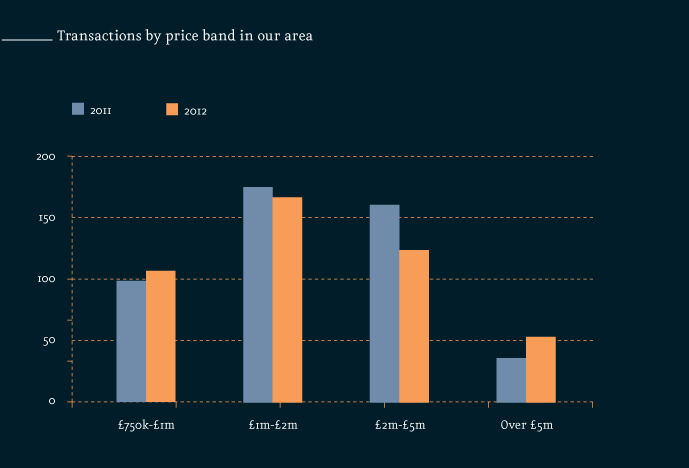 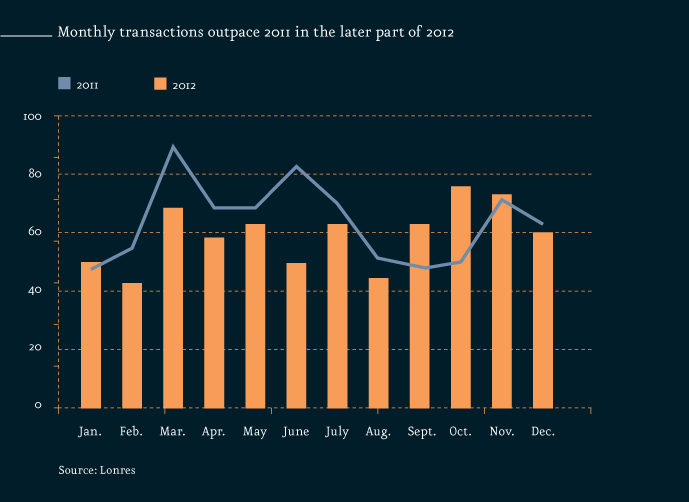 The motivations behind purchasing a home in London amongst buyers from overseas range from pure investment, buying for offspring, or those looking for a home, whether occasional or permanent, within the Capital. Whilst it is a common misconception that overseas buyers predominantly purchase through offshore vehicles, the uncertainty over rules relating to the additional costs of properties held ‘offshore’ has discouraged some potential purchasers from committing.

London remains a melting pot of different nationalities, with many calling the Capital home. Half of all residents in Kensington & Chelsea were born outside the UK, with French, Americans and Italians making up 12% of the resident population. In the UK as a whole, only 12% of residents were born abroad.

Aside from the obvious benefits of owning a home in the heart of London, for many of our European neighbours the instability of heir property markets as well as their economic and political backdrops has encouraged to many of them to spread their investment risk outside of the Euro.

The performance of sterling against many world currencies also means that there remains an opportunity for overseas buyers to purchase at a reduced price compared with domestic purchasers. Comparing the effective exchange rate of sterling (which measures the relative strength of a currency against other world currencies) shows an underperformance, meaning overseas buyers are able to purchase properties at a lower price compared to those buying with sterling. Indeed, prices in prime London increased by 30% over the past five years for domestic buyers using sterling. However in euros prices have only increased by 16% and by just 4% for those purchasing with US dollars. 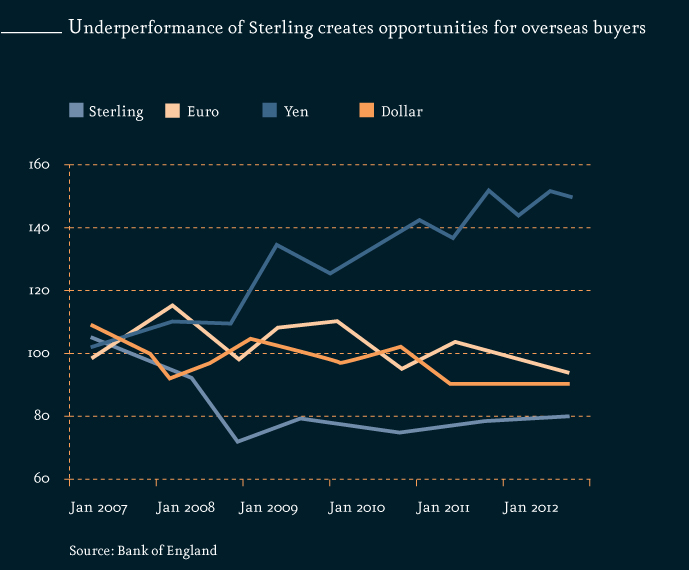 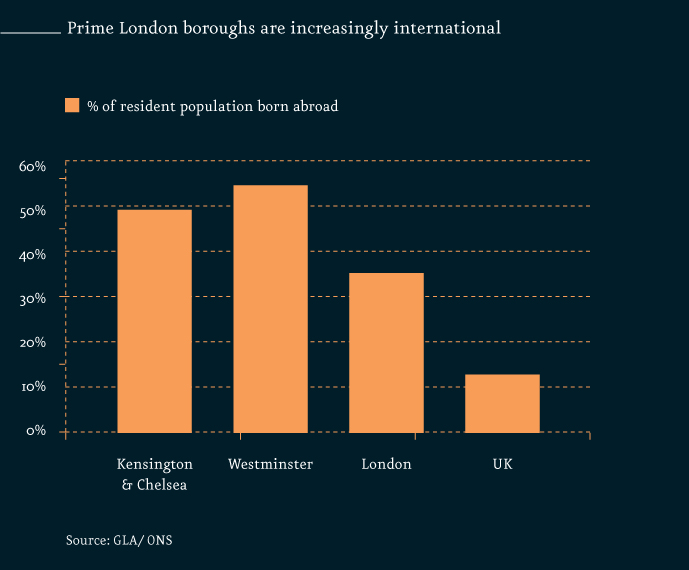 A lack of new stock reaching the market continues to be an issue across prime London, with buyers far outnumbering sellers in many of London’s most sought after postcodes. Across our market available stock levels have fallen by 11% with 828 properties available in January 2013 compared with 932 in January last year.

At Crayson we are seeing buyers look across multiple areas of the Capital to find their perfect property. We are delighted to be able to offer some outstanding homes in the most sought after areas of London.

Crayson are property specialists and are currently instructed on some of London’s best homes, ranging from £1 million to over £50 million. As well as a selection of the best properties in Notting Hill, Holland Park and Kensington we are now instructed on homes in the Prime Central market.

We understand the way in which buyers search for their perfect home is changing rapidly and are always at the forefront of new ways to buy and sell luxury property.

Here at Crayson we always strive to offer a superior service. We have built up strong relationships within the London market and are committed to always giving you the right advice no matter what. We invest in the highest quality marketing collateral and always ensure our advertising targets the best potential buyers, in order to achieve the highest price for our clients’ properties.