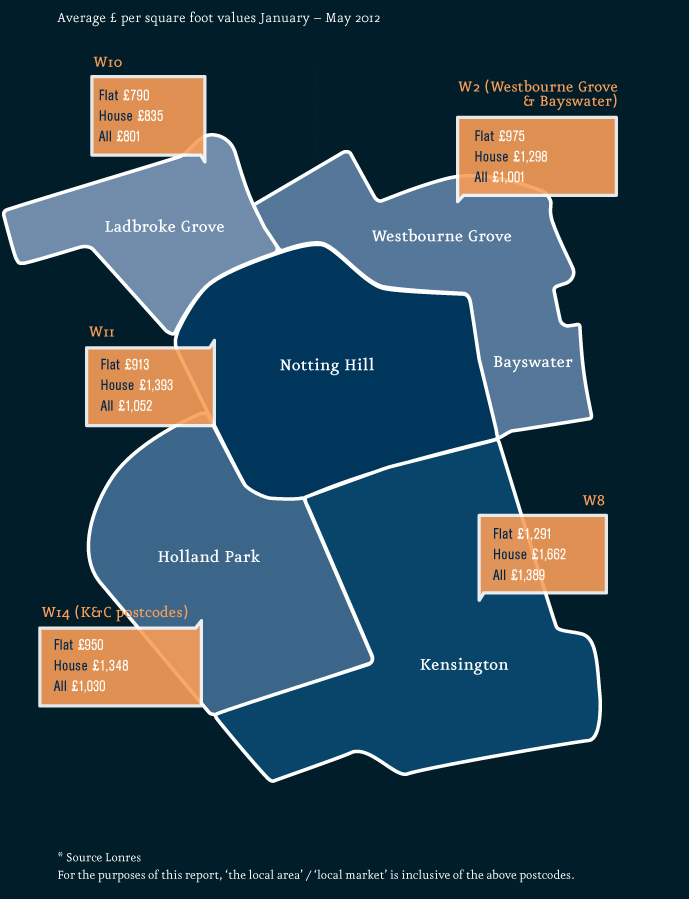 2012 has been a strong year so far for Crayson, and we have sold some first rate properties within our area. In keeping with the rest of central London, fewer transactions are taking place than in recent memory but buyers in our area remain focused on acquiring the best properties and some record prices have been achieved.

London continues to attract significant interest from overseas buyers. Those buying with dollar-pegged currencies are still able to take advantage of favourable exchange rates. In addition, many of our European neighbours are increasingly looking to diversify their investment portfolio outside of mainland Europe,
for unsurprising reasons.

‘ The market has undoubtedly been sluggish so far this year but we are enjoying the challenge – and managing to achieve record prices for the homes we sell.’
Nicholas Crayson

London’s housing market continues to outperform the wider UK market. Whilst UK house prices fell by 1% over the last twelve months, increases in Kensington & Chelsea and the City of Westminster were again in double figures, with growth of 11.6% and 11.9% respectively.

Average London house prices are now 125% higher than the UK average, the highest premium recorded on the Land Registry since the index was published in 1995. The prime London boroughs also show a similar premium over greater London, again setting new records. Prices in Kensington & Chelsea are now 188% higher than the London average and over six times higher than in England and Wales.

Prices within the Notting Hill and Holland Park market continue to increase. Average £ per square foot values achieved so far this year have grown by 4.9% for flats and 6.5% for houses when compared with 2011. Houses in W8 continue to command the highest prices, at an average of £1,662 per square foot, a 6% rise on 2011.

Here at Crayson, properties sold so far this year have continued to set new records. In May we sold a house on Horbury Crescent, W11
for £1,555 per square foot, the highest ever achieved on the street. This month we have agreed the sale of a modern townhouse on Woodsford Square, W14. The £1,202 per square foot achieved set a new price benchmark for the square for one of the single houses. 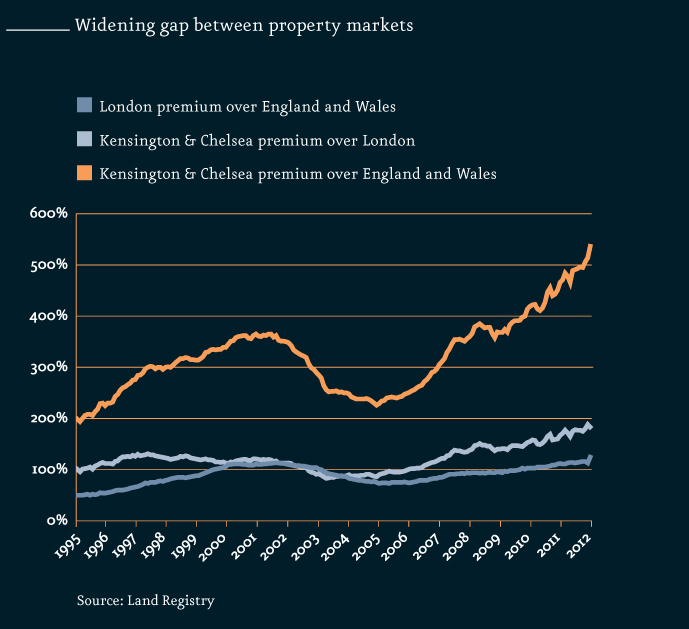 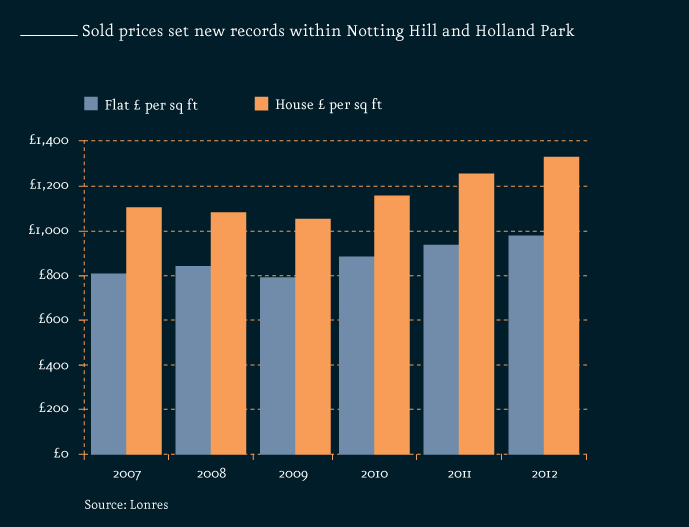 Whilst price growth across central London continues to rise, overall transactions so far this year have dipped, with 19% fewer sales in the first quarter of 2012 compared with the same period last year. Commensurate with the central London trend, transactions within our area are lower than last year. The market over £2 million in Notting Hill and Holland Park has been more resilient, however, with sales per month only 16% down on 2011 compared with a 24% fall for properties under £2 million.

With agents vying for new instructions, overpricing remains commonplace amongst some agents working within our market. At Crayson, we firmly believe that realistic pricing is vital from the outset, rather than unrealistic appraisals followed by price reductions. Across Notting Hill and Holland Park, 39% of flats and 34% of houses currently being marketed have been reduced in price since they were first launched onto the market.

We are finding that buyers are increasingly knowledgeable about the market and are unlikely to offer or indeed view properties which they feel are overpriced. At Crayson we have only had to reduce the price of one property so far this year, with all selling at or in excess of our asking price. 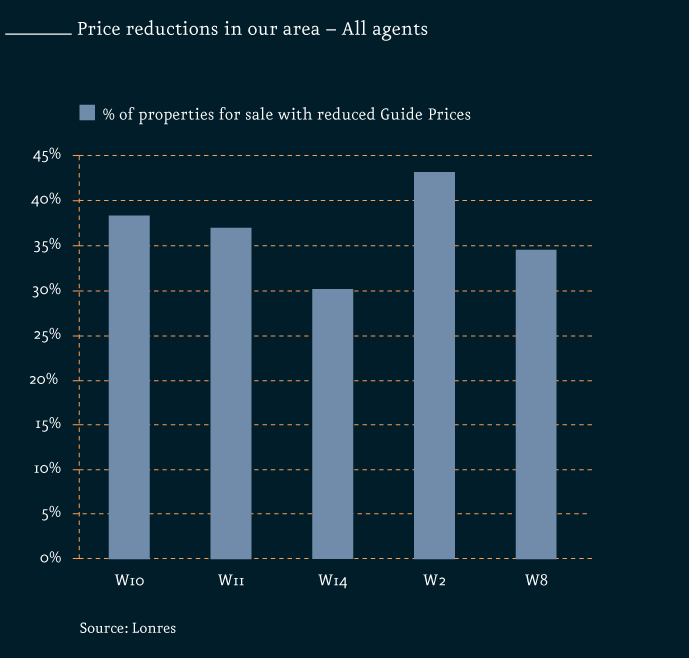 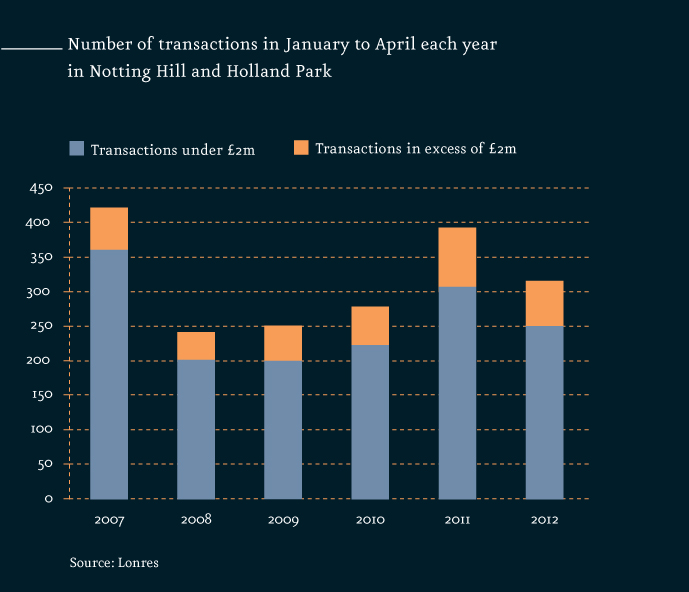 Earlier this year we saw an increase in the number of domestic buyers. Many of these applicants are looking to invest in prime London property in order to benefit from higher levels of return on investment than they are currently seeing from banks or the stock market.

As we moved into the Spring we saw an increase in overseas investors, particularly those from mainland Europe. We believe that this is because they see London property as a safe, reliable asset in times of economic uncertainty in Europe and further field.

A direct comparison of residential property price growth in Kensington & Chelsea with the London Stock Exchange (FTSE 100) shows a consistent outperformance over the past ten years; with growth of 123% compared with 11% respectively over the same period. Even over the past five years, including the peak and downturn
of 2007, £ per square foot prices achieved in Notting Hill and Holland Park increased by 17.6%. 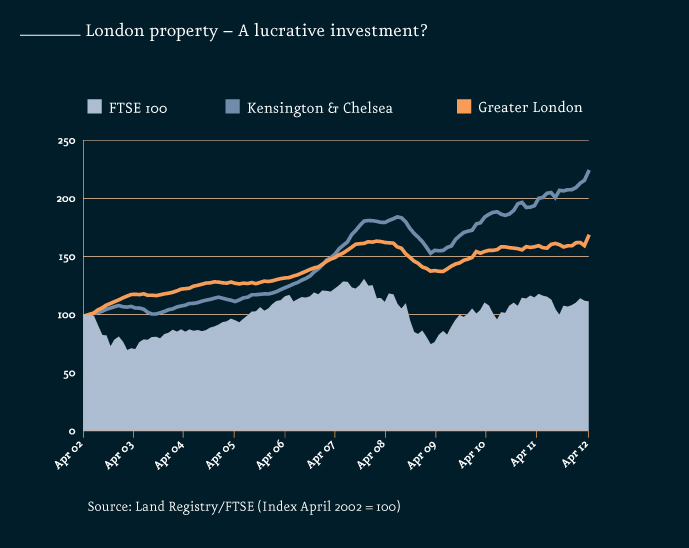 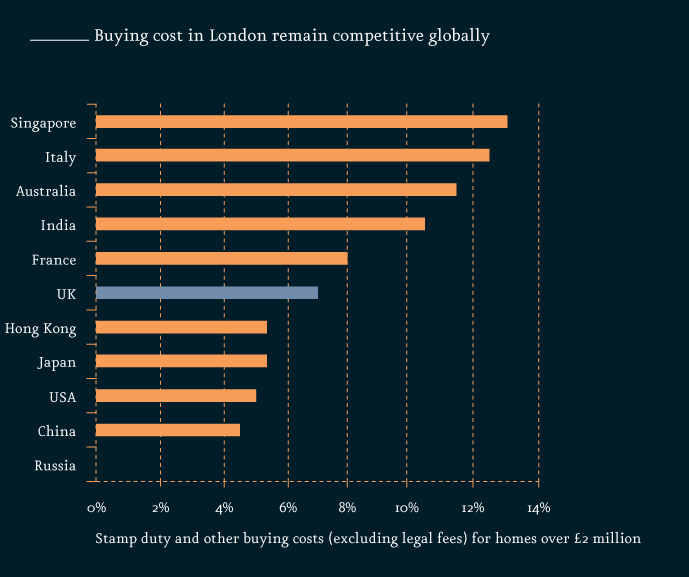 As we go to press, uncertainty continues to plague the Eurozone. Ministers are continuing in their attempts to resolve the economic difficulties of Greece, Spain and other member states in order to secure the future of the single currency. Turbulent times in the Eurozone are bringing buyers from mainland Europe into the prime London market. At Crayson, enquiries from European buyers have increased over the past couple of months, with Italian, French and also Russian buyers particularly active in the property market.

Despite the new 7% stamp duty levy for homes priced in excess of £2 million, those looking to buy in London may well find that buying costs, whether within their home countries or in other overseas buyer hotspots, are still higher than in the UK. Once stamp duty equivalents and buying costs are taken into account, both France and Italy, as well as Australia, Singapore and India, all prove more costly than buying in the UK.

‘ The upcoming Olympics create a unique opportunity for London. We have already been contacted by overseas buyers who are looking to combine a visit to the Olympics with their property search. We therefore expect that July and August will again be two of our busiest months.’
Nicholas Crayson