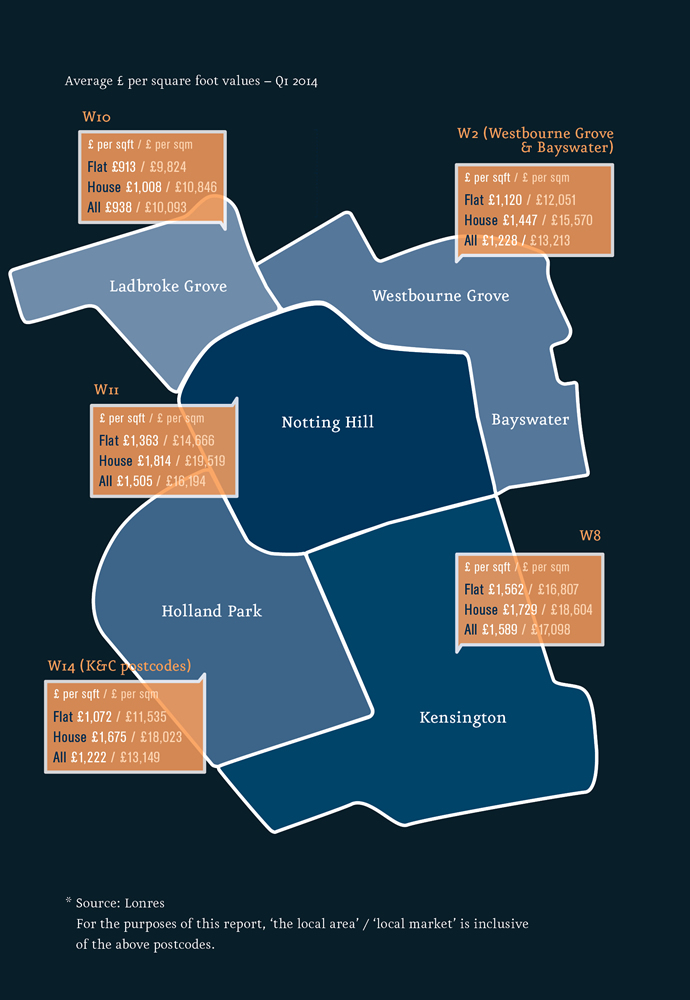 The first quarter of 2014 saw a largely positive stream of news on both the economy and the housing market. The economic recovery was very recently underlined by the IMF as they upgraded their forecast for the UK economy to 2.9%. They also now expect the UK economy to see the highest growth of any of the G7 nations this year.

As the turnaround in the fortunes of the UK economy continued and the housing market nationally finally started showing signs of recovery, the doom mongers have already suggested that a house price bubble is increasingly likely.

Whilst a house price bubble story is almost guaranteed column inches, the reality is that the market, in terms of transactions, is still recovering. Transactions, in even the highest value areas, are still below 2007 volumes and mortgage lending, albeit growing rapidly, is still less than half of what it was during the peak period.

Buyers remain willing to pay a significant premium to live in our area of the Capital. Access into the West End and the City, green space and the opportunity to own your own piece of central London all play an important role. For overseas buyers, even with the additional costs they could now accrue, London offers familiarity, security and a range of housing stock unparalleled elsewhere.

‘Many commentators and journalists are fanning the flames of a rumoured house price bubble and subsequent crash, risking the creation of a self-fulfilling prophecy.’
Nicholas Crayson

The UK housing market has started to follow London’s lead. Land Registry figures show prices nationally are now 5.3% higher than they were a year ago, the highest since July 2008. London is still the star performer with average values up 13.8% in the last year. Indeed, the RICS are now forecasting that prices nationally could rise 35% by 2020. The upturn in the housing market has resulted in commentators and the Bank of England raising concerns over an impending housing bubble. This had led to a spike in ‘housing bubble’ searches on Google in recent months.

These figures certainly suggest a rapidly growing market. However, when comparing them with the peak of the market, a different story emerges; one of recovery as opposed to overheating. Transaction figures remain below their 2007 peak by 36% nationally and by 22% in Kensington & Chelsea. Gross mortgage lending, which has risen in the last twelve months, remains 43% down on 2007 levels.

Average values nationally are only now returning to their 2007 levels (and are still lower in real terms). Although the market in London has fared better, prices still remain just 30% higher than they were seven years ago. Even growth in Kensington & Chelsea of 74% in the last seven years (2007 to 2014) is below the previous seven year price increase (2000 to 2007) of 96%.

As buyers return to the market, stock levels have not risen to meet demand. This, replicating the market dynamic we have been experiencing in London, is driving price growth. Whilst interest rate rises continue to loom on the horizon, calling a house price bubble is, we believe, premature and potentially damaging to both the housing market and the economy.

As we move into spring and London starts to bask in some much needed sunshine, the market in our area remains in good health. House prices in the last three months have risen by 2.3%, with £ per square foot values achieved so far this year 14.3% above where they were a year ago. Interest from prospective purchasers has picked up since the new year which will, we expect, lead to further growth in the coming months. This is starting to make the consensus forecasts for prime central London, published in our January briefing, look conservative at the very least.

The number of properties changing hands has risen too, with sales up 11.9% compared to a year ago. Ladbroke Grove, Westbourne Grove and Bayswater have been particularly active, with transactions up 26% over the same period.

Demand for homes between £2 million and £5 million has been rising, with the number of transactions within this price bracket increasing by 42% compared with the first three months of 2013. The total value of homes sold in Q1 2014, helped along by an increase in sales over £2 million, was 35% higher than Q1 last year.

Despite a strengthening Sterling, the top end of the market, traditionally more overseas buyer focussed, has been particularly busy. The number of properties sold in the first three months of this year was equivalent to the first nine months of 2013. Homes over £10 million comprise of 5.1% of sales so far this year, compared with 1.5% in Q1 2013.

Your guide to the Mansion Tax

Will your building be classed as a ‘Mansion’ after next year’s General Election?

Talk of a ‘Mansion Tax’ has not gone away. But details remain vague.

To date, the Liberal Democrats and Labour Party are ardent supporters. The Conservatives oppose its introduction.

The Lib Dems propose to tax homes valued at £2m+. Danny Alexander, the Liberal Democrat Chief Secretary to the Treasury, confirmed that ‘a lot of work’ had been done on how best to impose the charge, suggesting it could be introduced soon after the election.

In a recent announcement the Liberal Democrats confirmed that if elected, they will introduce additional council tax bands for properties valued over £2 million. They believe that this method would be a simpler way to implement the new charge, rather than a flat rate mansion tax. Currently council tax banding only goes up to band H, which means that all homes valued at more than £320,000 at 1991 prices, currently pay the same level of tax. The Lib Dems will release further details of the banding closer to the election.

Labour also proposes to tax properties over £2m, saying that it will lead to tax cuts for working families and pay for the reinstatement of a 10p tax rate to help low and middle incomes.

Recently, David Cameron gave his support to stamp duty and council tax, but ruled out a ‘Mansion Tax’ if he returned to office. Mayor of London, Boris Johnson, is also against its introduction. Chancellor George Osborne, however, appears to be more open to the idea.

The exact number of properties that will be impacted by the ‘Mansion Tax’ is open to much debate. But it will certainly have a far greater impact on London and the South East (see Table).

Understandably, those who will be affected are keen to know about the cost implications. Last year it was reported that the Treasury calculated it will cost on average £36,000 a year.

And the feasibility of implementing the new scheme?

Some believe that the existing council tax system should be updated. Others, that local solutions should be sought – with additional council tax revenue directed locally to tackle affordability in the country’s most expensive regions.

What does seem certain, is that a Labour or Liberal Democrat win in the election will be swiftly followed by the launch of a new mansion tax.

Uncertainty and, for some, concern remains.

London has over 35,000 acres of public green space, covering 38% of the city. In Kensington & Chelsea there are over 30 parks and open spaces across the borough. This makes London the greenest European capital, ranking third worldwide behind Singapore and Sydney.

London’s population density is less than half that of New York and 36% lower than Paris. What is obvious from a stroll around the Capital, is that London’s green spaces are not just confined to huge expanses of park land in outlying areas, but have been carefully planned and preserved, with squares and courtyards alongside some impressive private gardens. This is in contrast to fast growing cities like Shanghai and Mumbai, where far less emphasis seems to have been placed on retaining green public spaces.

Kensington & Chelsea, with a population density of 131 people per hectare, is almost half as populous as Manhattan at 251 people per hectare. This means each resident has the equivalent of 823 square foot of the borough each, compared to just 396 square foot in Manhattan. Equating this to property prices, each Kensington & Chelsea resident owns the equivalent of £1.12 million of space, whereas in New York this falls to £337,000.

Across the pond, apartment blocks dominate the Manhattan housing market. In contrast, 23% of residents in Kensington & Chelsea are living in a house, with many more having access to private or shared garden space. This means buyers are able to literally lay down their roots in the heart of the city.

The latest Budget was relatively kind to the property market, with pension reform opening up the possibility of pension pots being used to invest in residential buy-to-let. However, news was not so good for those holding homes in corporate structures.

The Government is sending out conflicting messages to overseas investors. On one hand, Boris Johnson and David Cameron are encouraging overseas investment in the UK, yet successive Budgets continue to penalise owners of property held offshore and homes at the higher end of the price spectrum.

Those looking to purchase homes for in excess of £500,000 and hold them within a corporate structure will now pay 15% stamp duty (existing threshold was £2 million). The Annual Tax on Enveloped Dwellings (ATED) was also revised, the previous £2 million starting point lowered to include residential properties at the same £500,000 threshold. Introduction of ATED will be phased over the next two years depending on the price band within which the property falls.

London is a rapidly expanding city. Since 2008 the population has increased by 600,000, and is expected to hit nine million by 2020. Volumes of new housing development in London has, for the last thirty years, been significantly below the levels needed to satisfy the demand of a growing population.

The latest Strategic Housing Market Assessment shows a need for over 23,000 new homes for private sale to be built per annum between 2014 and 2035. The Mayor’s target is currently set at 25,000 per annum. This represents a significant increase on recent construction figures, with government data showing just over 11,500 homes completed for private sale in 2013, with the highest figure in the last 25 years (2004) only hitting 17,700. The prime boroughs have seen some of the lowest levels of new development. In the year to April 2013, the borough gained just 65 new residential units. In this context, growth in prices in London, based on basic supply and demand dynamics, are unsurprising.