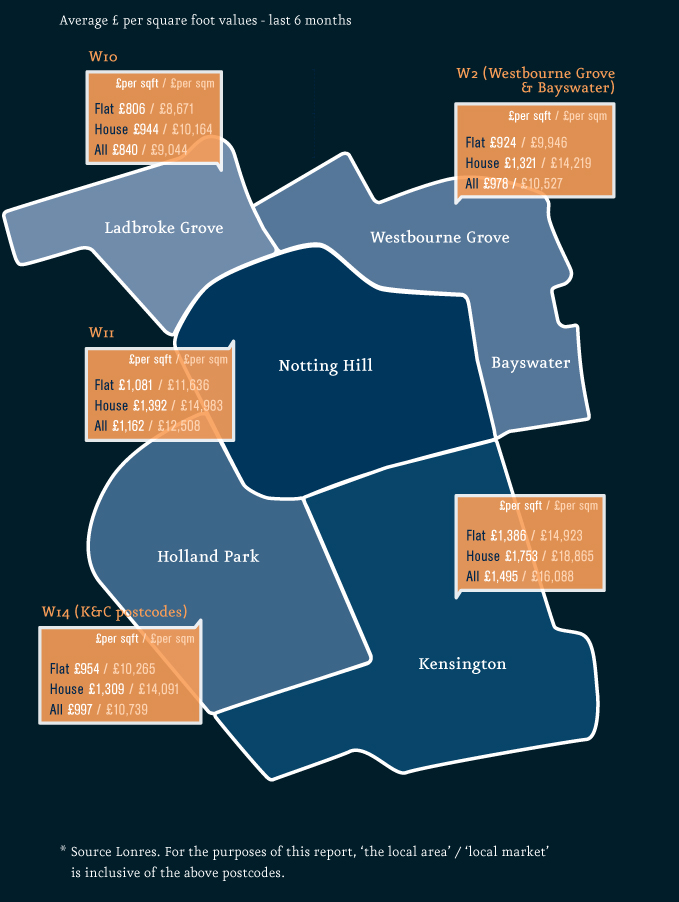 Despite the inclement weather spring has definitely sprung for the London property market. The renewed confidence in prime London reported in our January update has been carried through into the spring market, with sales, prices and new instructions all increasing this year.

In contrast to the slow start to 2012, sales activity so far this year in prime postcodes has been brisk, with 36% more properties sold than at this point a year ago. New buyer enquiries have risen since January, with the RICS reporting an increase in new purchasers registering across London every month so far this year.

The March budget demonstrated that the residential property market is to play a pivotal role in the future success of the UK economy. The government has pledged to increase house building levels and assist buyers getting onto and moving up the housing ladder.

The recent banking crisis in Cyprus has reiterated the importance of secure and safe investments. As the dust settled, loss of confidence in the banking sector benefited tangible asset classes such as gold and is expected to bring additional investment into the prime London property market.

‘At Crayson we have seen an increase in new instructions so far this year, with significant pent up demand meaning our outlook for 2013 remains very positive indeed.’
Nicholas Crayson

Unlike London, which has seen house prices rise 6.3% in the past twelve months, the housing market nationally continues a slow return to health, with prices increasing by 1% in the year to February. However, a sense of increased optimism is creeping into the market. The latest figures from Rightmove suggest asking prices rose to their highest recorded level in March, a 1.7% monthly rise. New stock rose by 12% with the average time taken to sell dropping by 11% to 80 days.

Whilst prime London property has seen far more significant price appreciation than the UK mainstream market, transactional activity remained an issue in both markets over the course of 2012.

However, at the end of the first quarter of 2013, values transaction numbers and new stock levels have all improved. So far this year buyers in Notting Hill, Holland Park and Kensington have spent an average of £126 million per month, 17% more than at this point in 2012.

Whilst a proportion of this increased spend can be attributed to price rises (having increased by 9.1% over the past 12 months), the latest figures do show transaction levels also rising. 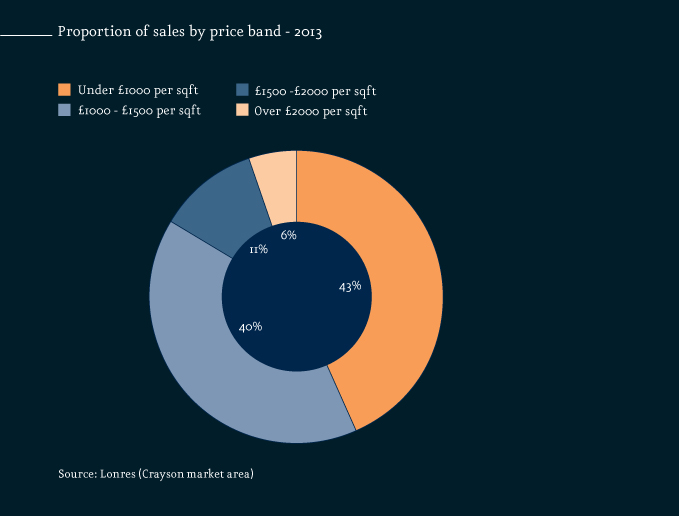 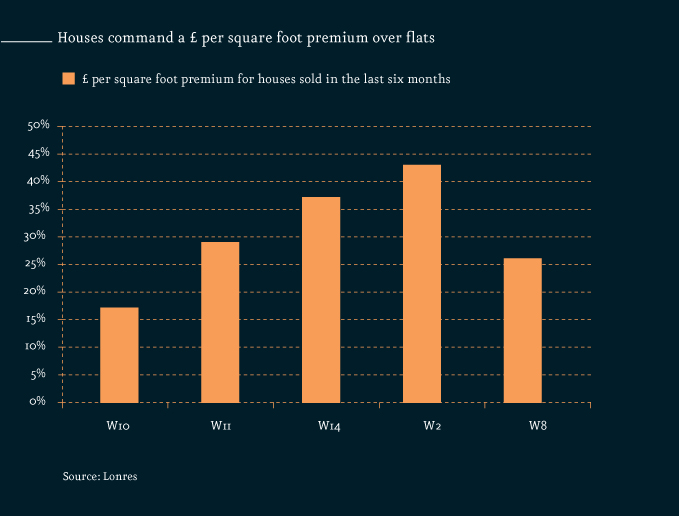 In recent years a lack of stock has been a key theme in the prime London market, with interested buyers far outweighing sellers.

So far this year, new stock levels have improved dramatically. In the first quarter of 2013 the number of new property instructions in our area were 65% higher than 2012 averages.

The most significant increases in new stock being listed have been within W11 (Notting Hill) and the Kensington & Chelsea postcodes of W14, where properties listed for sale rose by 101% and 86% respectively.

Further clarity on the implications of the new annual charge and changes to offshore ownership over £2 million, outlined in December’s Draft Finance Bill and the March budget, have resulted in increased sales activity over the £2 million threshold as well as an increase in new instructions. The number of properties released onto the market at between £2 million and £5 million has increased by 84%, and over £10 million the number was 101% higher than in the first quarter of 2012. 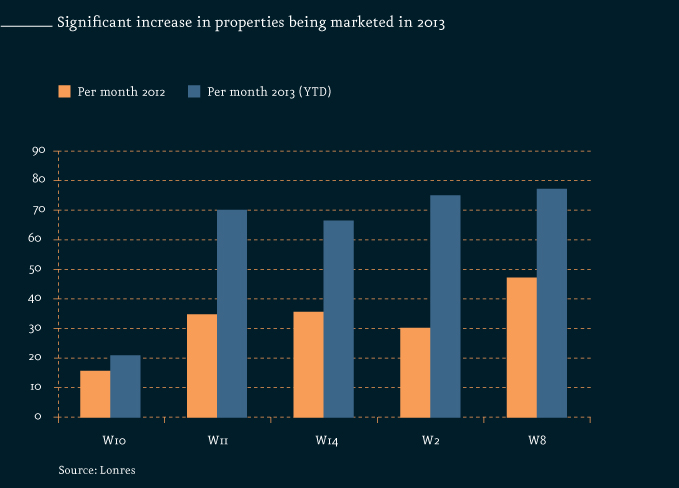 A weaker than expected fourth quarter for the UK economy has led The Office for Budget Responsibility (OBR) to revise their economic forecasts for 2013 downwards. The OBR now expects the UK economy to grow by 0.6% over the course of the year, with 1.8% forecast for 2014.

Despite the downward revision by the OBR, ratings agency Standard & Poors has not followed Moody’s in downgrading the UK economy, and has reaffirmed its AAA rating.

A considerable amount of wealth from around the world has been invested in London real estate in recent years and this trend looks set to remain. Wealth creation continues, with the new world economies outpacing the established Western powerhouses. The annual Forbes billionaires list now boasts 1,426 names with a total net worth estimated at $5.4 trillion, a 17% rise on the $4.6 trillion a year ago. The US leads with 442 billionaires, 15% more than Asia Pacific.

The recent events in Cyprus again raise the question over where to securely invest ones money. The Cypriot banking crisis led a rallying of gold prices, with the gold price recording its highest weekly rise for four months in the days following the crisis. Whilst it still may be too early to call, we expect prime London residential property will also benefit as investors continue to choose it as their preferred asset class. 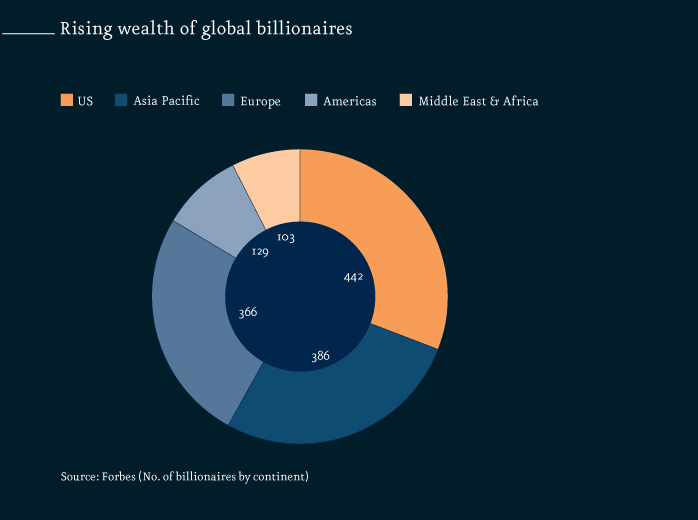 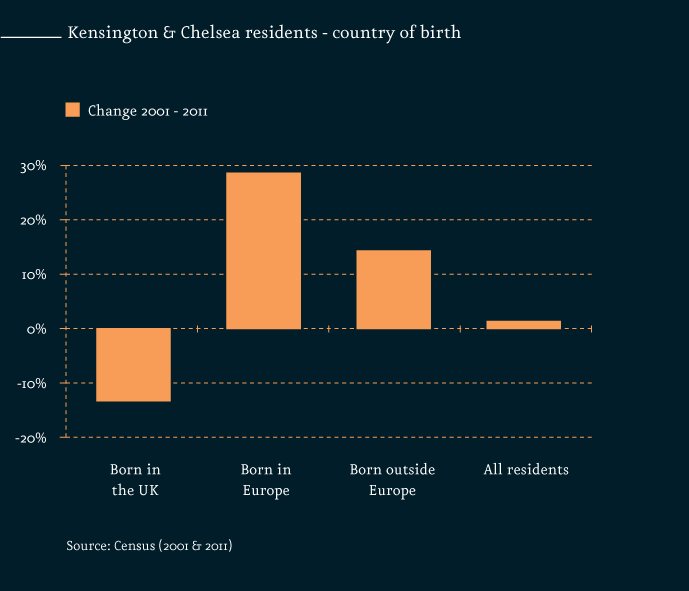 It is a common misconception that overseas buyers are purchasing in London remotely, using overseas offshoots of UK property companies to source and buy properties. Whilst this may be the case with new schemes launched overseas, in our experience the vast majority of prospective buyers are coming to us directly, either in person or through a representative, often a London based buying agent.

As well as those looking for an investment outside their home country, many are choosing London as a place to relocate to. The number of residents in Kensington & Chelsea increased by only 0.5% in the past decade; however an increasing number of residents were born outside the UK and now choose to call our area home.

UK born residents in Kensington & Chelsea have dropped by 13% over the last decade, but the number of residents born elsewhere in Europe rose by almost 30%, with a 15% rise in those born outside Europe.

The most expensive property sold on Holland Park Mews was one of the largest properties, the 2,059 square foot home sold in March 2011 for £3.1 million (£1,506 per square foot).