The summer Market Intelligence from Crayson tracks property values and trends, and gives in-depth, incisive facts and figures on the property market in the Notting Hill, Holland Park and Kensington areas.

Nick Crayson says, “Put simply, vendors who achieve the best price for their property do so by bringing their home to market at the right price, creating early interest amongst buyers. Properties that are launched at an unrealistically high price are missing out on crucial selling opportunities in the early stages of marketing. The average amount of time before a property is first reduced is currently 70 days.”

Chart: Percentage of properties being marketed at reduced prices 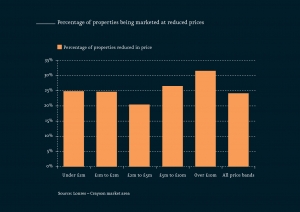