If you choose the right statistics, it’s easy to make a case for a housing bubble. Prices nationally are 5.3% higher than a year ago, the highest since July 2008; London prices up 13.8% on last year; and there are forecasts of national prices rises of 35% by 2020. These figures certainly suggest a rapidly growing market; but is it a bubble or a recovery?

Average values nationally are only now returning to their 2007 levels (and are still lower in real terms). Although the market in London has fared better, prices still remain just 30% higher than they were seven years ago. Even growth in Kensington & Chelsea of 74% in the last seven years (2007 to 2014) is below the previous seven year price increase (2000 to 2007) of 96%.

As buyers return to the market, stock levels have not risen to meet demand, and this is driving price growth, as it has in London. But as the supply / demand ratio evens out, price rises will inevitably moderate. Prices are of course affected by supply, and while the UK’s massive undersupply of housing continues, prices will continue to rise. London is no exception.

Since 2008 the population of London has increased by 600,000 and is expected to hit 9m by 2020. Volumes of new housing development in London has, for the last 30 years, been significantly below the levels needed to satisfy the demand of a growing population.

The latest Strategic Housing Market Assessment shows a need for over 23,000 new homes for private sale to be built per annum between 2014 and 2035. The Mayor’s target is currently set at 25,000 per annum. This represents a significant increase on recent construction figures, with government data showing just over 11,500 homes completed for private sale in 2013. 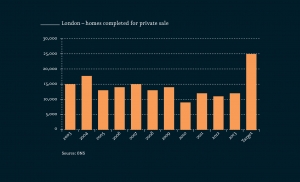 The prime boroughs have seen some of the lowest levels of new development. In this context, growth in prices in London, based on basic supply and demand dynamics, are unsurprising, and could be argued to be a greater cause than speculative behaviour.

Transaction figures have risen across the country, but remain below their 2007 peak by 36% nationally, and by 22% in Kensington & Chelsea.

Gross mortgage lending, which has risen in the last 12 months, remains 43% down on 2007 levels.

The threat of interest rate rises is a constant presence. As is that of a Mansion Tax. So as the turnaround in the fortunes of the UK economy continue, and the housing market starts its recovery, we are, in my opinion, not experiencing a housing bubble.

Finally it’s arguable that the Royal Borough and Westminster areas are relatively undervalued when compared to other world cities.  Our population density is relatively low and development per square foot is low as we have lower build property  – therefore property square footage per square foot of plot is lower than comparable capitals.

For greater insight, and to help separate the fact from the fiction, we have just released our newest research which can be seen here, or if you would like a hard copy posted to you please email Emily Ingles:  emily@crayson.com